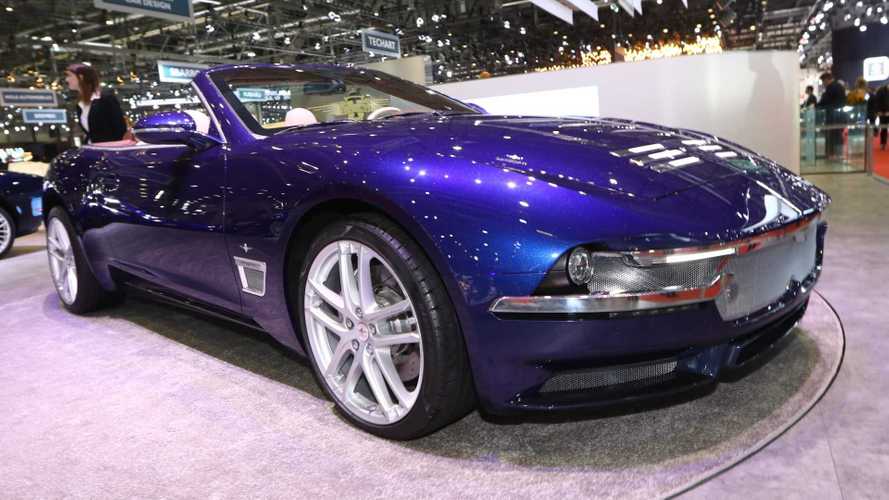 With the introduction of its latest fuoriserie, Touring Superleggera underlines its status as a key player in the luxury market.

Touring Sciàdipersia Cabriolet is an open-top grand tourer, which recreates the luxury and elegance synonymous with the Golden Age of Motoring.  Four full-sized seats allow all occupants to enjoy their journey in supreme comfort, while the driver has the pleasure of harnessing the immense and smoothly-delivered power from one of the last great atmospheric V8 engines and reveling in its glorious soundtrack.

Company CEO, Piero Mancardi, had the following to say: “...our success has caused us a dilemma, because, since we launched the coupé last year we have pressure from new customers to develop the open top version, but we have an undertaking with existing customers to keep our products exclusive.  Our solution is to maintain the limited production run of just 15 Sciàdipersia, from which the customer chooses whether to opt for the existing Coupé or the new Cabriolet version.”

When Touring's revered name was revived in 2009 its raison d'etre was, and remains, to re-introduce to the world the concept of the fuoriserie - literally, “out of series” - for which the great Italian coachbuilders of the past were so famous.  The range of skills, from state-of-the-art engineering to traditional craftsmanship, has made possible the resurgence of unique and low-volume coachbuilt cars of the style which disappeared in the latter half of the last century. It is satisfying to note that other companies are following Touring's lead in this trend, serving the growing demand for individually specified cars.

Sensorial pleasure will always be at the forefront of Touring's designs, whether it be from aesthetic appeal by elevating its cars to artwork on wheels, or from providing the ultimate driving experience.  Sciàdipersia is such a car - beautiful to look at and involving to drive.

In 1957 Maserati chose Touring to design, and manufacture the body of their first series production car, their new 3500GT.  The outstanding success of this car led to a very restricted run of convertible versions.  Just three of these very special models were produced, the first being revealed at the Geneva Show in 1958.

Following the launch of this quintessential gran turismo, Touring was approached by the ruler of Iran who commissioned “a grand design of regal elegance”.  The Maserati 5000GT Shah of Persia was the result, and with the introduction of the Sciàdipersia Cabriolet Touring has created a timeless masterpiece, inspired by these immortal models from its magnificent past.

The already dramatic proportions of Sciàdipersia coupé are further emphasised in the Cabriolet version.  The side view portrays an arrow about to be loosed from a bow, with a suggestion of fletches at the rear. The sharpened front, powerful haunches and Kamm-tailed rear are exaggerated by the smooth flowing lines, depicting a tautness and dynamism that appears even greater with the roof lowered.

The deliberately extended rear overhang is said to hint at the long tails of a morning suit, in-keeping with the overall sense of style and occasion.

Sharp edges and flat surfaces revert to suggestions of elegant styles from the 1970s, while the clever use of different treatments for the brightwork finishes reveal the true hand-crafted coachbuilt nature of the Sciàdipersia.

Fittingly for an open car, themes are copied across from the exterior to the interior space. The car displays an obvious horizontal divide, emphasised by a continuous line encircling the passengers, above which surfaces are covered with chocolate leather, while beneath are sumptuous hides in cream, picked through in novel orange stitching outlining a sophisticated diamond quilted pattern.  As with all Touring's products, the colours and finishes were determined by the knowledgeable customer, who was involved throughout the design process.

The result is typical of Touring's designs, displaying perfect proportions and restrained elegance without the need for unnecessary and flashy ornamentation.  Simple, classic and timeless design that continues to set standards by treading its own unique path, defining a style of its own, and deliberately diverging from common trends.

Just like the car which inspired it, Sciàdipersia is based on a Maserati rolling chassis.  Choosing the Maserati GranCabrio as a basis gave Touring Superleggera the ideal starting point, its specifications being perfectly suited to the project, with excellent torsional rigidity, comfort and high performance. The glorious naturally aspirated V8 engine has a noble character and can provide effortless power and torque, giving the driver an immensely satisfying experience. The mechanical components, electrical systems and all electronics are retained unaltered from the manufacturer.

Sciàdipersia is built entirely by hand in the Touring Manifattura in Milan blending traditional hand-beaten aluminium panels with lightweight carbon fibre elements. Precision and quality of the body must match the most compelling standard, and cutting-edge digital measurement tools are used for this purpose at each stage, from the panel fabrication through to the body-in-white and the finished car. The manufacturing process is completely documented and digitally logged to ensure repeatability.

Quality control processes include static and dynamic tests before the vehicle is approved for road use.  High standards of panel alignment, panel gaps and clearances, painting, polishing, leather craft and stitching are all rigidly adhered to. Functional tests are conducted in a climatic chamber. Dynamic tests for air and water tightness, road noise, wet and dry handling, driveability, braking, NVH and all performance aspects are carried out on track. Tests are also carried out for maximum speed and rough surface behaviour.

Sciàdipersia has received Type Approval under European Directive 2007/46EC for cars in small series production.  The engine complies with the EURO 6 regulations.