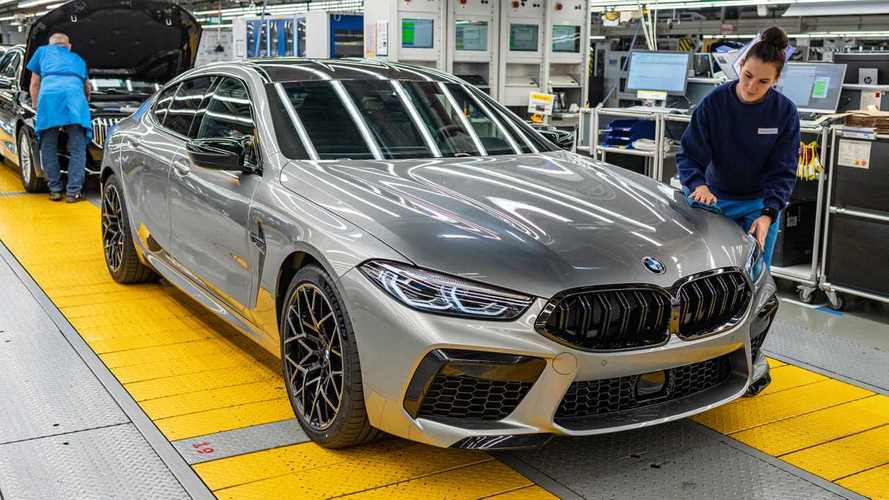 Dingolfing. At the BMW Group's Dingolfing plant, the new BMW M8 Gran Coupé rolled off the production line for the first time at the beginning of November. As the sixth model variant, the BMW M8 Gran Coupé completes the BMW 8 Series family and at the same time continues the BMW Group's model offensive in the luxury segment. As a competition model, the four-door high-performance sports car is powered by the most powerful engine ever developed for BMW M automobiles. The 4.4-litre eight-cylinder engine produces 625 hp and offers outstanding dynamic performance.

The BMW M8 Gran Coupé is characterised by its independent proportions, dynamically stretched silhouette and gently flowing roof line at the rear. Compared to the two-door model variants, the wheelbase has been extended by 200 millimetres, resulting in a significantly improved level of comfort in two full-fledged rear seats. The BMW Group's Dingolfing plant produces up to 60 units of the BMW M8 model family per day. A good 40 percent of the production volume is accounted for by the Gran Coupé.

"With the new BMW M8 Gran Coupé, the location has once again proven what it is capable of. After five successful ramp-ups in 2019, we have once again strengthened our position at the top of our model portfolio and strengthened our position as the leading unit of the luxury class. All employees can be proud of this," says Christoph Schröder, Head of the BMW Group Dingolfing Plant.

In addition to the automotive core production, the production of vehicle components such as pressed parts or chassis and drive components is located at the site. Thanks to its aluminium expertise in chassis construction and many years of experience in alternative drive systems, the BMW Group Dingolfing plant supplies key components such as high-voltage accumulators, electric transmissions and drive structures for the new BMW i models to Leipzig and manufactures high-voltage accumulators and electric motors for plug-in hybrid models of the BMW Group.

The plant also builds the bodyshells for all Rolls-Royce models. The so-called Dynamic Centre, a large storage and transshipment centre, supplies the worldwide BMW and MINI dealer organisation with original BMW parts and accessories.

With its brands BMW, MINI, Rolls-Royce and BMW Motorrad, the BMW Group is the world's leading premium manufacturer of automobiles and motorcycles and provider of premium financial and mobility services. The BMW Group production network comprises 31 production and assembly plants in 15 countries; the company has a global sales network with representatives in over 140 countries.

The BMW Group's economic success has always been based on long-term thinking and responsible action. The company has firmly anchored ecological and social sustainability along the entire value chain, comprehensive product responsibility and a clear commitment to the conservation of resources in its strategy.