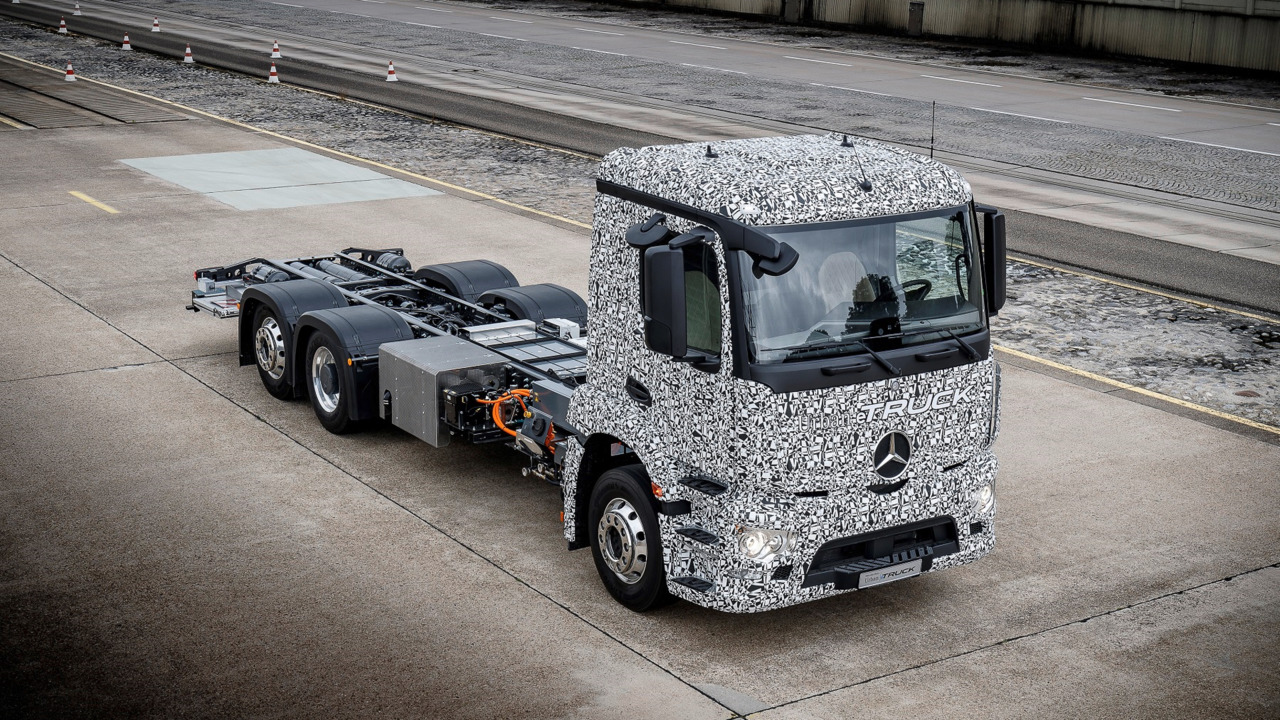 Stuttgart – The world’s most successful truck manufacturer Daimler Trucks is presenting the Mercedes-Benz Urban eTruck in Stuttgart today, as the first fully electric truck with an admissible total weight of up to 26 tonnes. This means that in the future, heavy trucks will take part in urban distribution operations with zero local emissions and hardly a whisper. The market launch of this technology is conceivable for Daimler Trucks at the beginning of the next decade. In the light distribution sector, Daimler Trucks has already been impressively demonstrating the day-to-day suitability of the fully electric truck in customer trials with the Fuso Canter E-Cell since 2014. The development of electric trucks and series production maturity are fixed parts of the strategy of Daimler Trucks to build on our technological leadership. For this purpose a considerable part of the future investments by the truck division in the fields of research and development flow in the further development of the full electric drive.

"Electric drive systems previously only saw extremely limited use in trucks. Nowadays costs, performance and charging times develop further so rapidly that now there is a trend reversal in the distribution sector: the time is ripe for the electric truck. In light distribution trucks, our Fuso Canter E-Cell has already been undergoing intensive customer trials since 2014. And with the Mercedes-Benz Urban eTruck, we are now electrifying the heavy distribution segment up to 26 tonnes. We intend to establish electric driving as systematically as autonomous and connected driving," says Dr Wolfgang Bernhard, responsible for Daimler Trucks & Buses at the Board of Management.

Better air quality, lower noise and restricted-access zones are now important keywords in large metropolises worldwide, because more and more people worldwide are moving to cities. 2008 was the first year in which more people lived in cities than in the countryside. The trend is continuing: The UN predicts a global population of nine billion people by 2050, with approximately 70 percent of them living in cities. In future, it will be necessary to transport goods in urban environments for increasing numbers of people – and with the lowest possible emissions and noise. By now large cities such as London or Paris are considering a ban on internal combustion engines in city centres in the future. That means: there will be fully electric trucks ensuring the supply of humas with food or other goods of daily needs.

Until quite recently, the use of fully electric drives systems in trucks seemed to be unimaginable – especially because of the high costs of the batteries coupled with a low range. The technology has now become much more mature. In particular battery cells rapidly developing further. Daimler Trucks

Stefan Buchner, Head of Mercedes-Benz Trucks: "With the Mercedes-Benz Urban eTruck, we are underlining our intention to systematically developing the electric drive in trucks to series production maturity. This means that we will begin to integrate customers, so as to gain valuable joint experience with respect to the operating ranges and the charging infrastructure in daily transport operations. Because we think the entry of this technology into the series production is already conceivable at the beginning of the next decade."

Technically the Mercedes-Benz Urban eTruck is based on a heavy-duty, three-axle short-radius Mercedes-Benz distribution truck. In addition, however, the developers at Daimler Trucks have totally revised the drive concept: The entire conventional drivetrain being replaced by a new electrically driven rear axle with electric motors directly adjacent to the wheel hubs – derived from the electric rear axle which was developed for the Mercedes-Benz Citaro hybrid bus. The power is supplied by a battery pack consisting of three lithium-ion battery modules. This results in a range of up to 200 km – enough for a typical daily delivery tour. Thanks to the integrated concept with motors adjacent to the wheel hubs, the batteries are housed in a crash-proof location inside the frame.

As the EU Commission is in favour of increasing the permissible gross vehicle weight of trucks with alternative drives by up to one tonne, this will more or less level out the weight surplus of the electric drive. This will raise the permissible gross vehicle weight of the Urban e Truck from 25 to 26 tonnes, which will bring the original extra weight down to 700 kg compared with a directly comparable IC-engined truck.

Where light-duty trucks are concerned, all-electric drive is already a reality. This is demonstrated by the Fuso Canter E-Cell. Fuso already presented the first generation of the fully electrically powered Canter in 2010. In 2014 this was followed by the second generation, which proved its worth in the first fleet trials in Portugal. With ranges of over 100 kilometres, the vehicles exceeded the average daily distance covered by many trucks in light-duty short-radius distribution. Under widely varying operating conditions, the trucks covered more than 50,000 km within one year. In the process the vehicless were locally emission-free and, taking power generation into account, reduced CO2 emissions by 37 percent compared to diesel engines. The operating costs were 64 percent lower on average.

Marc Llistosella, Head of Daimler Trucks Asia and President & CEO of Mitsubishi Fuso Trucks and Bus Cooperation (MFTBC): "The current generation Canter E-Cell offers our customers transport services which are not only environment-friendly, but also economical. Our test in Lisbon revealed respectable savings of around 1000 euros per 10,000 kilometres in comparison to diesel trucks."

"We at Fuso have now acquired extensive experience in the development of local emission-free commercial vehicles und we will consequently pursue this development also in future. At the Commercial Vehicles show IAA in September, will will take a step further towards series production with our next generation under the new name: Fuso eCanter,” continues Llistosella.

Current fleet trials with the Fuso Canter E-Cell in Germany

Since April 2016 the city of Stuttgart and the parcel service provider Hermes are testing five Fuso Cater E-Cell in Germany. Especially the using in the topographically very demanding environment in urban Stuttgart provides important insights for Daimler Trucks from the customer operation with regard to the further development of the fully electric drive. First results from this customer trial are expected at the beginning of 2017.

Dirk Rahn, Managing Director Operations at Hermes Germany underlined during the today’s event: "We are very proud of our successful cooperation with Daimler in the development of relevant future technologies for many years. Also regarding the current project, we accepted with pleasure the invention of Daimler to actively support the testing of the Fuso Canter E-Cell out of our logistical everyday life. Thereby, the results of our trest run are extremely positive! With regard to the growing requirements in city logistics we are now looking forward to test further vehicle classes and to bring them to market maturity soon. Our common goal: making e-mobility more economical.”