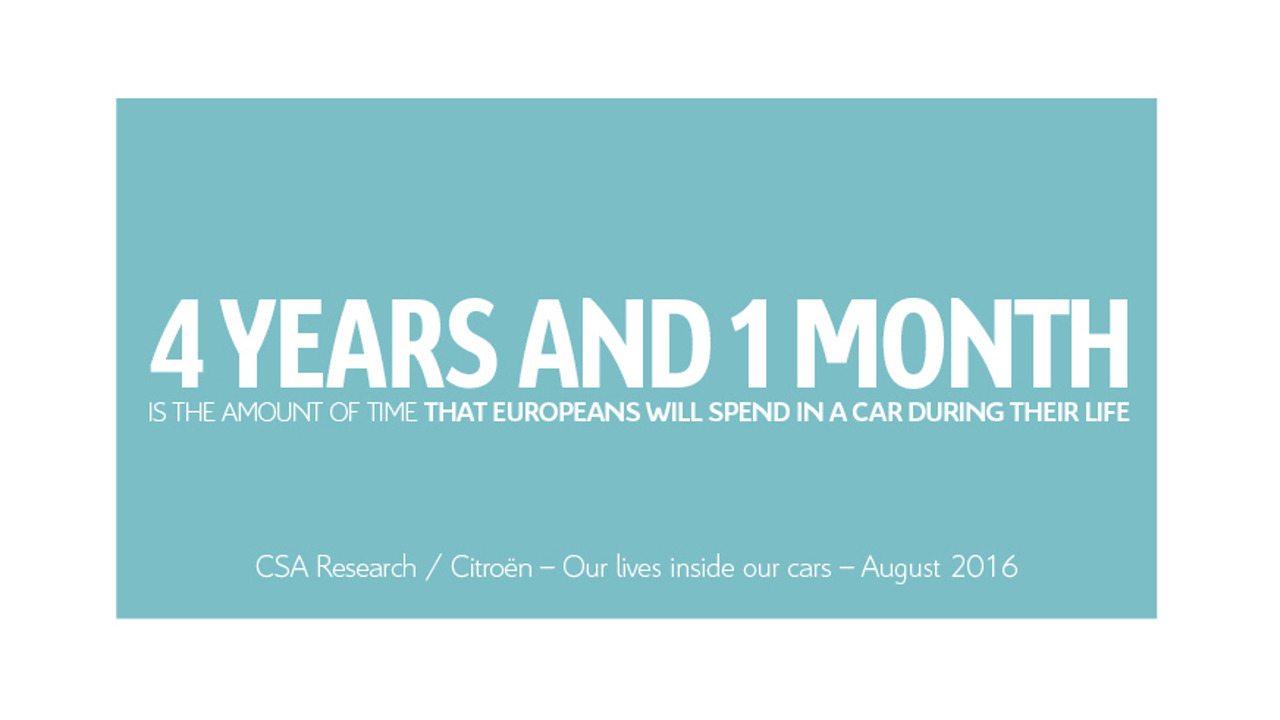 Ahead of the Paris Motor Show, Citroën is unveiling the results of a survey carried out in Europe with CSA Research entitled “OUR LIVES IN CARS”.
The survey reveals a host of new and surprising information about the lives of motorists in their cars, inspiring a new TV ad campaign set for launch in mid-October called “CITROËN INSPIRED BY YOU”.

The purpose of the survey

Cars. Much has been said about the performance of their engines, the beauty of their styling, and their increasingly sophisticated technological innovations. But have we really explored what goes on inside a car – what people do in their cars, how they feel and how they live in them?

Not really. Which is why Citroën, a core brand for European motorists, recognised for the comfort it brings to its customers, and committed as part of the PSA Group to preparing the car of the future, sought to demonstrate its difference on this subject.

Citroën today is revealing the results of an exclusive survey called “Our lives in cars” carried out in seven European countries with the CSA Research market research agency. The survey was administered in July and August 2016 with samples of around 500 people aged 15 and over in Germany, Spain, France, Italy, Poland, Portugal and the UK.

Citroën initiated the survey because before you can design a car you need to understand how people live in it.

• Europeans who drive almost every day will thank or wave to 10,056 people on the road.

• The car is an extension of the bathroom for many Europeans, who do their hair, shave or put on their make up in-car 1,234 times.

• Cars are also a place for relaxation, a bubble in which Europeans charge their batteries, doing so 1,336 times in their lives.

• They also see highly surprising things from their vehicles, 225 times to be precise.

• Cars are also a place of emotions, for better and for worse: European motorists laugh uncontrollably 170 times and cry 59 times in their cars over the course of their lives.

• They experience a lot of things with their loved ones in their cars: taking part in a game 58 times, making up 61 times and saying “We’ll be there soon” 228 times in response to “Are we there yet?”

• The car is also a place with strong sensual overtones. In their lives, Europeans kiss 2,432 times and make love 4 times in their cars. Some major geographical disparities are of note here, with the English and French making love around 3.4 times compared with 8 times for Italians!

The results of the study are presented at the end of the press release accompanied by a summary sheet.

The study will be highlighted in Citroën’s upcoming campaign, “Citroën inspired by you”.

The main film in the ad campaign will reveal how much time we spend in cars in Europe and focus on the importance of travelling well-being. It will be revealed by Citroën CEO Linda Jackson at a press conference at the Paris Motor Show on 29 September at 9.45 am. The ad campaign will be broadcast on 14, 15 and 16 October after a 15-day teasing campaign in the social networks. Shorter video formats, also based on the findings of the survey, will showcase the Citroën technologies and services that enable motorists to benefit more than ever from car life, including Citroën Advanced Comfort, Citroën ConnectedCAMTM, Airbumps and Citroën Advisor.